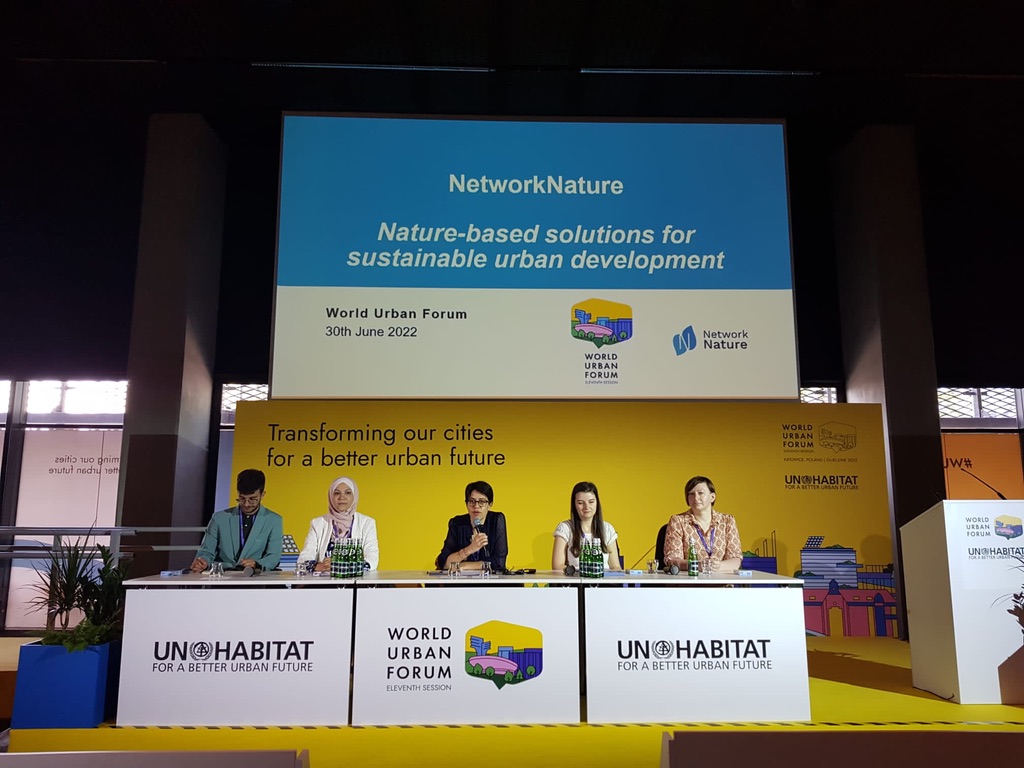 The World Urban Forum: What are the outcomes for nature?

Held for the first time in Eastern Europe, the 11th edition of the World Urban Forum (WUF) took place from 26 to 30 June 2022 in the city of Katowice, Poland, with the theme “Transforming our cities for a better urban future”. A unique, multi-stakeholder UN platform, the WUF presents an opportunity for member states, local governments, the private sector, and civil society to engage once every two years in constructive discussions on sustainable urbanisation that will largely determine progress in meeting the Sustainable Development Goals (SDGs). A total of 22,500 online and face-to-face registrations were made, representing a total of 173 countries.

During the opening ceremony, Maimunah Mohd Sharif, Executive Director of the UN Human Settlements Program (UN-Habitat), emphasized the importance of climate and environment-related action in improving the future of our cities through the development of greener, more sustainable, and more inclusive infrastructure. The city of Katowice itself is a good example of this goal: its industrial and mining heritage contrasts with the concerted efforts made in recent decades to strengthen the city’s resilience and foster a green economy.

In the wake of the recent global health crisis and with the war in Ukraine across the border, the issue of reconstruction was at the heart of many discussions. There has been a shift at WUF over the past 15 years from a focus on technical solutions to a focus on discourse and dialogue that directly address crises. The concept of nature-based solutions has begun to permeate the forum – owing to increasing awareness of their considerable potential to address pressing urban challenges while simultaneously delivering human wellbeing and biodiversity benefits.

The IUCN French Committee as well as youth IUCN members (members of commissions, organizations, and other experts) under 27 years of age brought the subject of urban nature to the forum through several different projects. The IUCN French Committee, together with the EcoMaires Association and the IUCN Urban Alliance, contributed to the French Partnership for Cities and Territories (PFVT)’s “Cities and Biodiversity” publication, in which it presented to the public its recommendations for sustainable urban development. It helped organize an event at the French Pavilion dedicated to promoting wildlife in cities, which allowed two IUCN member organizations (LPO and BirdLife) and an IUCN legal expert to present some of the actions that have been taken to better accommodate urban biodiversity, as well as the steps to be followed in order to curb the illegal trafficking of species. The delegation of young people from the IUCN French Committee and from across Europe held a workshop in which they presented some of the actions that young people are taking to reintegrate nature into their cities: a communal garden project, use of nature as a post-conflict solution, urban planning, city governance, and more.

Representing the IUCN, I actively participated in various sessions on the multidimensional evaluation of sustainability with the Environment Europe Foundation; of particular importance was the topic of nature-based solutions for urban resilience, organized by the IUCN and Susanna Gionfra of the IUCN Regional Office for Europe.

The success of these events and the numerous conversations that took place during the WUF suggest that nature is gaining increasing attention beyond the usual spheres of conservation. The efforts of the IUCN French Committee and its members helped to elevate the conservation agenda on the international stage. Moreover, the participation of the next generation in dialogue and multidisciplinary reflection has become a pillar of our actions moving forward. Bringing so many young IUCN delegates proved to be a great success that will be repeated at other major international events.

What were the major conclusions of this world meeting?

A notable development at the WUF, which been similarly evident at other recent international events (e.g., COP26), is the increasing recognition of nature. At the WUF, terms such as urban nature, wildlife, and nature-based solutions frequently surfaced in official speeches, panel debates, and informal discourse.

Several speeches gave special attention to nature. Colleen Vixen Kelapile, President of the UN Economic and Social Council (ECOSOC), spoke of the importance of nature conservation among several key themes such as multi-level governance and continuous stakeholder dialogue, deemed critical for the implementation of the Urban Agenda. Martha Delgado, President of the UN-Habitat Assembly also stressed the need to work with rather than against nature. Finally, in her concluding remarks, UN-Habitat Executive Director, Maimunah Sharif, stressed the urgency for urban action. She indicated that the next WUF will be held in Cairo, Egypt, in 19 months’ time and that, at the time of her speech, there rea only “2,742 days” left to achieve the SDGs and create synergy between the various international agendas.

We are a coalition of IUCN constituents concerned with urban dimensions of nature conservation. Work with us to create greener, healthier and wilder cities.